I just recently spent three weeks in India, traveling all around the country with my dad and my brother. My parents participate in a Western spiritual philosophy that borrows heavily from Hindu and Buddhist practices, and their guru’s guru has an ashram in Tiruvannamalai (Southern India), where we spent the first week of the trip. The first photo is an image taken during our hike up Mount Arunachala on a foggy Christmas day, overlooking Arunachaleshwara Temple, a massive Dravidian temple in Tiruvannamalai. The four towers are called gopurams and they are entrances placed at north, south, east, and west. The second photo is a view of one of the gopurams, from inside the temple. 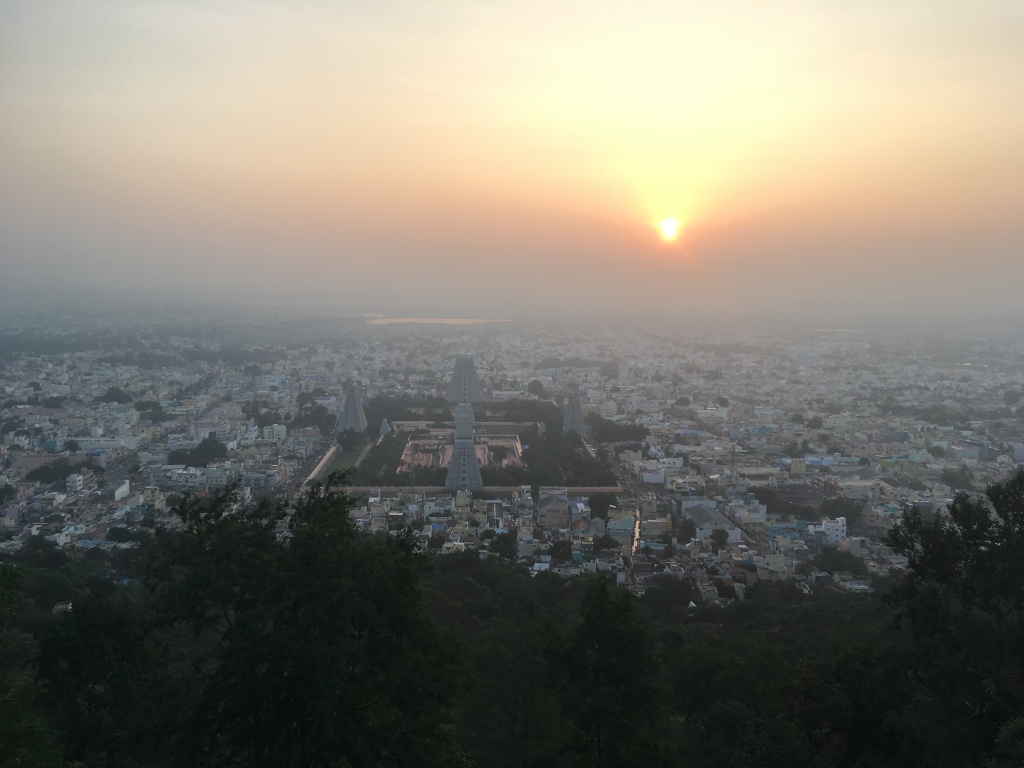 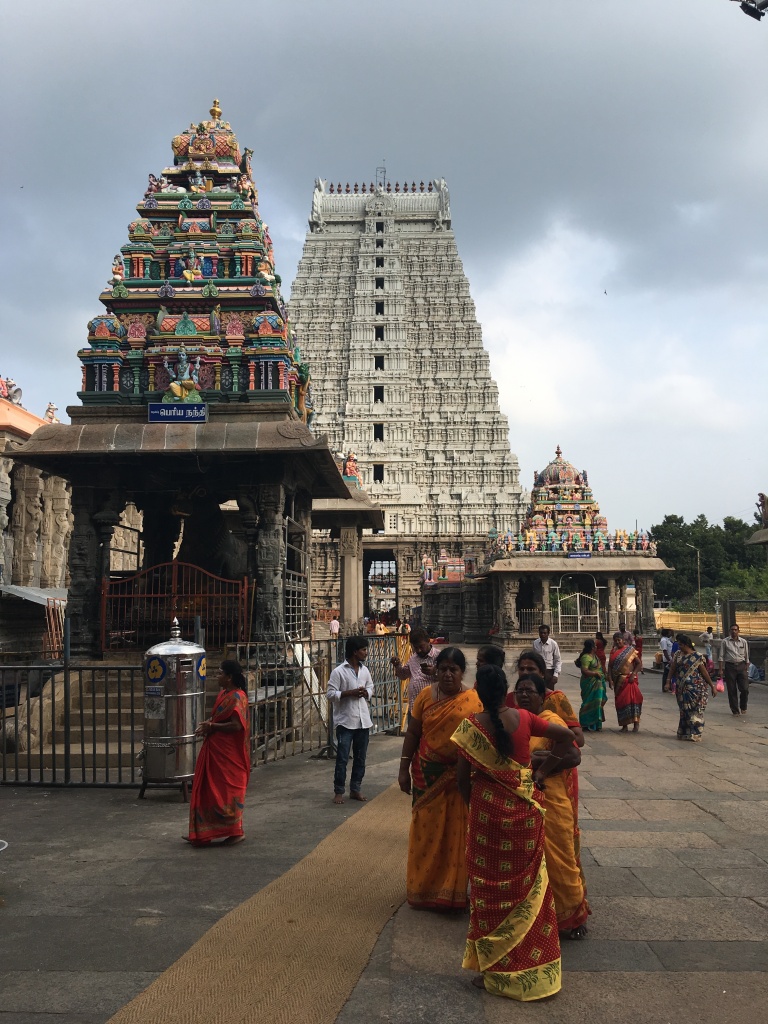 From there, we traveled north to Aurangabad, where we took day trips to see Ajanta and Ellora caves. Ajanta is a collection of 29 Buddhist cave monuments cut into a horseshoe-shaped canyon, constructed between 2nd century BCE and 4th century CE. Ellora caves were created later, between 6th and 10th century CE, and consist of 34 Buddhist, Hindu, and Jain cave monuments. The image below is Kailasa Temple at Ellora Caves, a massive Hindu temple carved from a single rock. 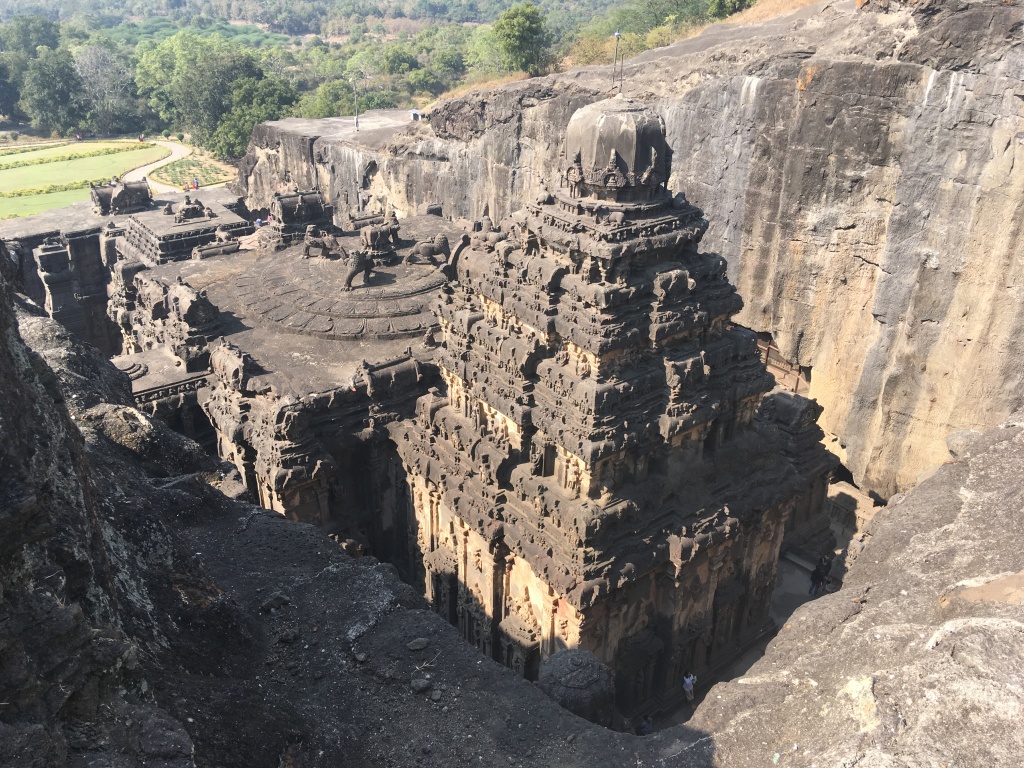 Next, we flew east to Kolkata. We had a long layover in Mumbai, and spent that time taking a tour of Dharavi Slum in Mumbai, the densest place on the planet and the 3rd largest slum in the world. That was probably the most impactful part of the trip, and although we were not allowed to take photos on the tour, I will find some photos on the internet to show to the class when do my little talk next week.

We spent a couple of days in Kolkata, an ancient city and cultural hub in West Bengal (Bengali food is incredible, btw). We walked through Kumartuli, the potter’s district, where clay deities are produced year-round for two large festivals. The figures are created by covering straw armatures with clay, then finished with paint and sometimes clothing and wigs. They are never fired, and are simply thrown into rivers after being used in the festivals. There are hundreds of clay figures lining the narrow alleyways of Kumartuli. 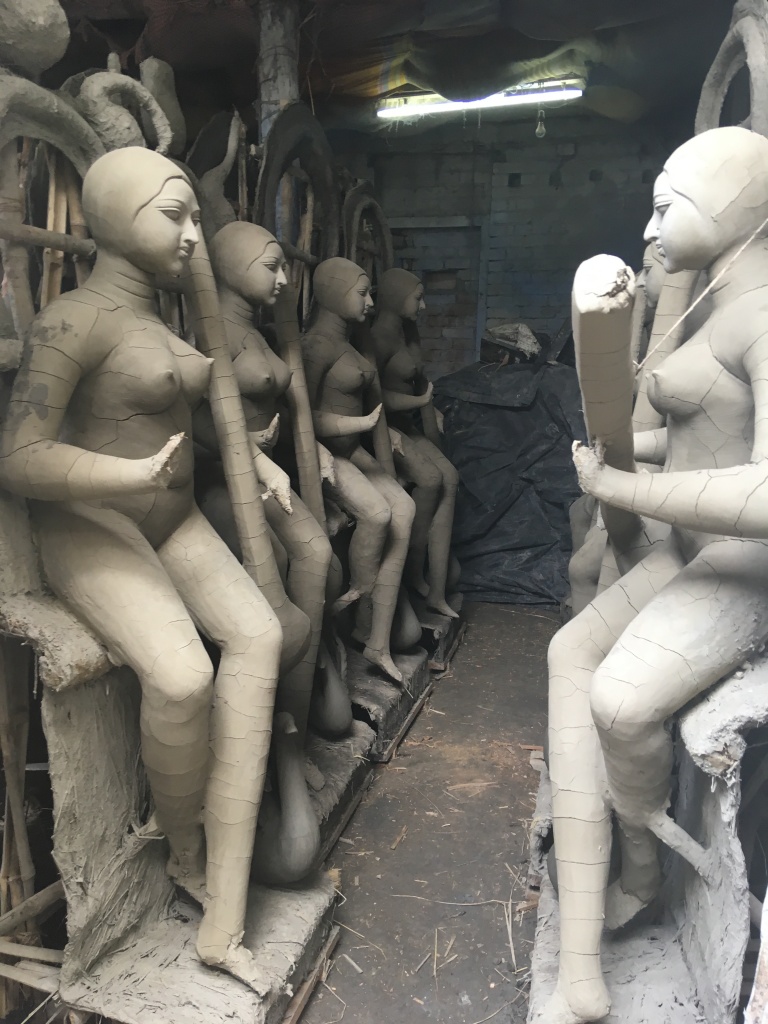 That evening, we had sleeper train tickets that were going to take us to Varanasi…but, the train was delayed 12 hours, and we ended up paying a driver to take us, a 14 hour trip on crazy Indian highways, all while the driver repeatedly fell asleep at the wheel. We arrived in Varanasi a little worse for wear, but the next couple of days were well worth it. Varanasi, called Banaras by locals, or sometimes called Kashi, is an ancient holy city on the Ganges River, where bodies are constantly being burned in the ghats on the river. The first image shows a morning fire ritual, which is performed every single day, and the next photo was taken from a foggy early morning boat ride on the river. 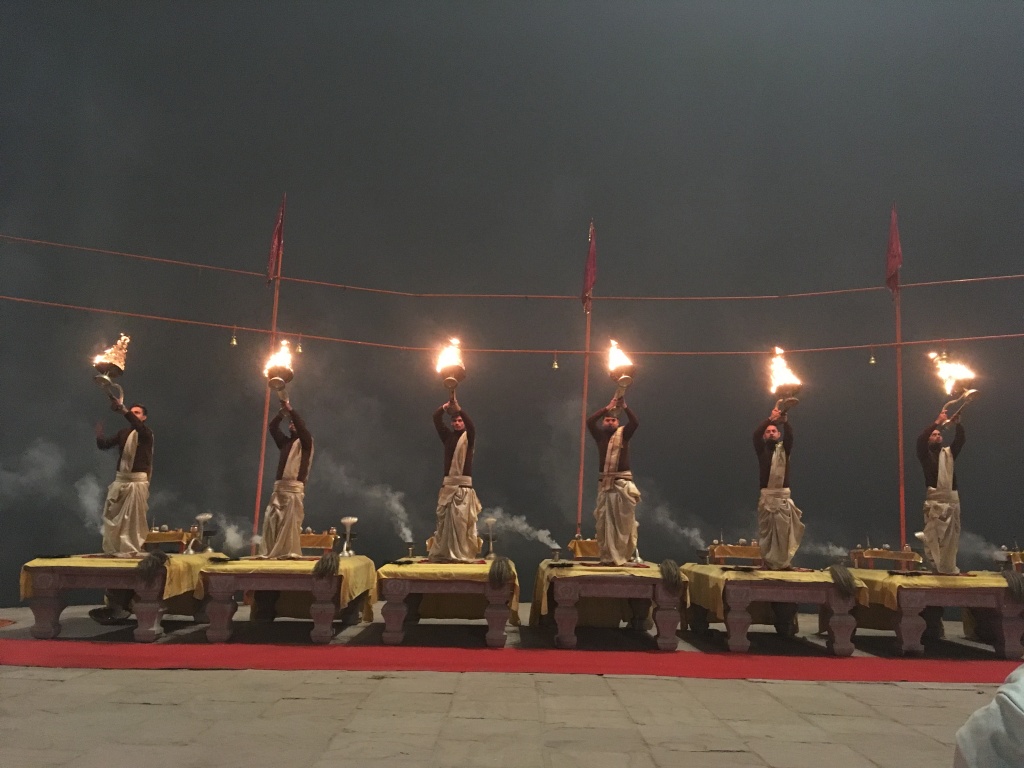 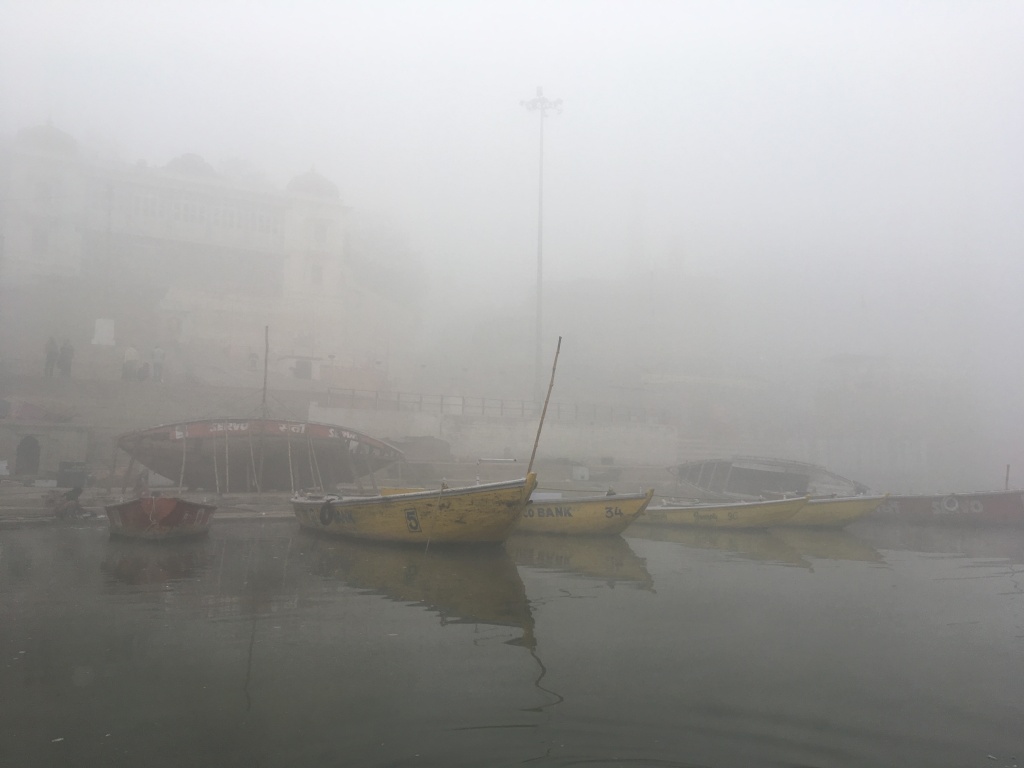 After Varanasi, we were off to Jaipur, where we did some shopping in the incredible textile and jewelry bazaars.

Our travels picked up in pace once we left Jaipur, and we were spending only a day in each remaining city, starting with Rishikesh. Rishikesh is a tourist town, a yoga destination and also where the Beatles famously attended Transcendental Meditation training courses at the ashram of Maharishi Mahesh Yogi, which heavily influended the White album. The Ganges River is much cleaner and picturesque than in Varanasi… 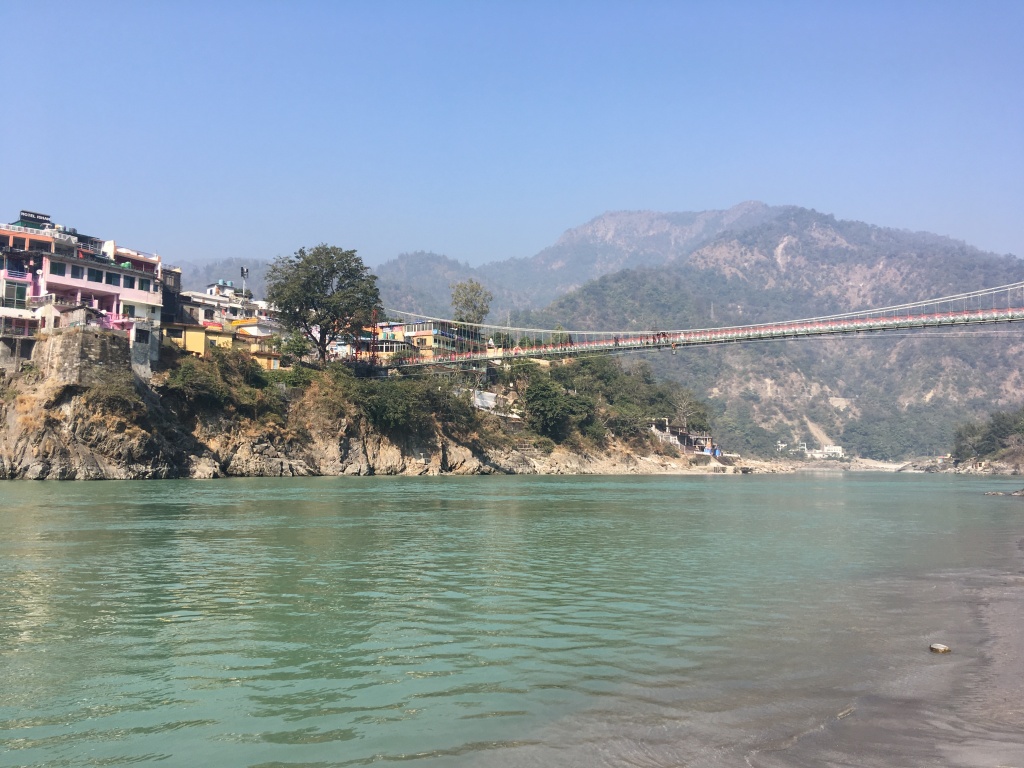 The next day, we traveled to Haridwar and saw a riverside fire ceremony. Our final destination was Dehli, where we spent a couple of days shopping and I also got some incredible food poisoning just in time for our 16 hour flight back to the US! All in all, it was an incredible albeit very intense trip that gave me a lot of perspective on lifestyle and cultural differences between the United States, which has much better infrastructure but much more individualistic cultural norms, and India, which is an incredibly peaceful and happy culture with very poor infrastructure/sanitation.